Porcelain painting was developed in China and later taken up in Korea and then Japan. Decorated Chinese porcelain from the 9th century has been found in the Middle East.

Porcelain for trade with this region often has Islamic motifs. Trade with Europe began in the 16th century. By the early 18th century European manufacturers had discovered how to make porcelain. The Meissen porcelain factory in Saxony was followed by other factories in Germany, France, Britain and other European countries. Technology and styles evolved. The decoration of some hand-painted plates and vases from the 19th century resembles oil paintings. In the later part of the 19th century china painting became a respectable hobby for middle-class women in North America and Europe.

The Ding kilns in northern China began production early in the 8th century, where they produced sophisticated and beautiful porcelains and developed innovative kiln stacking and firing techniques.

Ding ware had white bodies, and typically had an ivory-white glaze. However, some Ding ware had monochrome black, green and reddish brown glazes. Some were decorated with the sgraffito method, where surface layers were scaped away to expose a ground with a different color.

Jingdezhen was among the first porcelain manufacturing centers in the south of China, with ready access to kaolin and petunse. In its day it was the world's most important center of porcelain production. Jingdezhen ware includes the famous decorated Qingbai pieces with shadow-blue glazes.

Under the Yuan dynasty the use of underglaze cobalt blue decoration became popular. During the Ming dynasty (1369-1644) production of blue and white and red and white ceramics peaked. The Jingdezhen artisans developed and perfected use of overglaze enamels in the second half of the 15th century. They excelled in their floral, abstract or calligraphic designs. 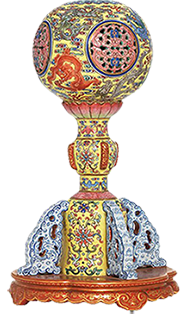 ➤ Excerpt from a recent article in the Daily Mail, UK. A porcelain antique (pictured right) used as a table lamp for more than 50 years by a couple in their Welsh bungalow has sold for a staggering £581,000 at Christie's after it was revealed to be an incredibly rare 200-year-old Chinese relic. The 10in tall porcelain figure turned out to be an ornate 'nine dragons' (which symbolised power) hat stand made for Emperor Dauguang of Imperial China's Qing dynasty. It was sold to an anonymous Asian buyer for nearly twice its estimate.
Image from: Daily Mail, UK, November 2016

Porcelain timeline...
● 618AD Porcelain discovered in the Tang Dynasty in China where its composition remained secret for hundreds of years
● 1295AD It is rumored that Marco Polo may have been the first to bring a Chinese porcelain vase to Italy.
● Early 1500's Trade was established with the Far East and porcelain became a valued symbol of luxury and wealth. European powers began to seek the secret of porcelain.
● Late 1500's Europeans failed to unlock the Chinese secret.
● 1709AD Augustus II, King of Poland locked the German chemist, Johann Friedrich Bottgu, in a lab until he came up with a formula for porcelain.
● 1730AD Johann Joachim Kandler created small, figurines.
● America Porcelain made its way to America.
● Late 1800's the cost of porcelain production was so high that it was only made for royalty and nobility. 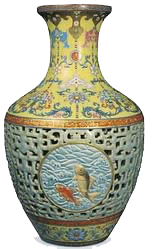 TODAY this magnificent art form has produced figurines, jewellery, boxes, ornaments, tableware, and so much more!

➤ Excerpt from a recent BBC documentary about the manufacture of Chinese porcelain during the Qing Dynasty (1644 - 1911). This porcelain was highly prized in Britain at the time and shiploads of it were sent to Europe where it was purchased and flaunted by wealthy buyers. The documentary ended with an account of the vase (pictured left) which was brought to Britain during the Opium Wars, recently found in an attic, then sold for $80 million to a Chinese collector. One feature of the vase was unique even at the time it was made. Its yellow glaze was reserved for the Emperor's eyes only.
Image from: Wall Street Journal, November 17, 2012, $80M vase.